Rationality versus irrationality in the Brexit process

The Sword and the Marketplace: Europe needs a defence union to support its economic integration

Valerie Herzberg (Central Bank of Ireland) presented the case for a European defence union (based on joint work with Edouard Vidon, both in their personal capacity), provoking an impassioned discussion in her PEFM audience.

Why a defence union? 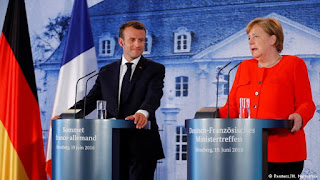 The Arguments For are both security and economic. On the security side, the EU is facing considerable risks on its Eastern and southern flanks, while the Trump presidency and Brexit have cast new doubts on NATO solidarity. On the economic side, countries’ unilateral capacity to scale up their own national defence spending is limited by fiscal rules and in some cases high debt—the same constraints that restricted their capacity to stabilize in the face of the euro area crisis.

Hence—and this was the main point of the presentation—it makes sense to bring the two conversations together: a common defence policy is a needed public good which could contribute to EMU deepening.

Defence spending as an economic stabilizer
Valerie pointed out that the reforms pursued since the crisis to strengthen euro area architecture may not be enough to deliver the stability needed to preempt future crises. (i) Banking union will be an important new safeguard, but the large relative size of European banks and difficulties in closing them will limit how big a role banking union can ultimately play in smoothing shocks. (ii) And, while the European Stability Mechanism has shown itself to be an effective provider of liquidity, by its nature as a crisis response mechanism it comes into play only late in recession, rather than offering a permanent shock absorber. The implication is that fiscal stabilization will still be needed, and in Herzberg-Vidon’s view, defence spending could provide a more effective and acceptable stabilizer than other proposed schemes (for instance, common unemployment insurance or a stabilization fund); ‘military bases do not close down during a recession’.

The sword and the marketplace: Economic integration and the defence union

SEESOX
Oxford, United Kingdom
SEESOX is part of the European Studies Centre at St Antony's College, University of Oxford. It focuses on the interdisciplinary study of the relationship between European integration and the politics, economics and societies of the Balkans, Greece, Turkey and Cyprus. Drawing on the academic excellence of the University and an international network of associates, it conducts policy relevant research on the multifaceted transformations of the region in the 21st century. It follows closely conflict and post-conflict situations and analyses the historical and intellectual influences which have shaped perceptions and actions in the region. In Oxford's best tradition, the SEESOX team is committed to understanding the present through the longue duree and reflecting on the future through high quality scholarship.